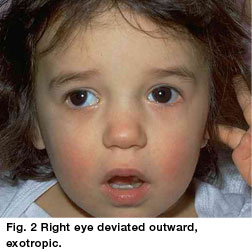 The purpose of this study was to evaluate the surgical results in childhood primary comitant large-angle exotropia (>30Delta) after a single operation and to analyze the factors that could influence these results.

We carried out a retrospective study in all children presenting with comitant primitive exotropia at an angle greater than 30Delta, who were operated on in our department from January 1996 to December 2000 by various surgeons. One hundred thirty-eight (138) cases were reviewed. The children with a substantial A or V phenomenon, retraction syndromes, nystagmus, those presenting with a neurological disease and those who had had previous eye surgery were excluded. The postoperative results were classified in three categories: residual exotropia over 10Delta, good postoperative result (esotropia<10Delta, orthotropia or exotropia<10Delta), and consecutive esotropia over 10Delta.

Ninety-seven children fulfilled the study criteria. Forty (41.2%) were boys and 57 (58.8%) girls. The average age at the time of surgery was 6.5 years (SD 3.1). Sixty-eight of 97 (70.1%) had intermittent exotropia. Twenty-six children (26.8%) underwent a bilateral recession of the lateral rectus, 67 (69.1%) a unilateral operation, recession of a lateral rectus/resection of a medial rectus, and four (4.1%) an operation on three horizontal muscles. Sixty-nine percent of the children operated on had a good postoperative result, according to criteria defined in our study, 1 year after surgery.

Childhood primary comitant large-angle exotropia can be corrected with a single surgical procedure, unilateral or bilateral, with a success rate which, in our study, reached 69%.